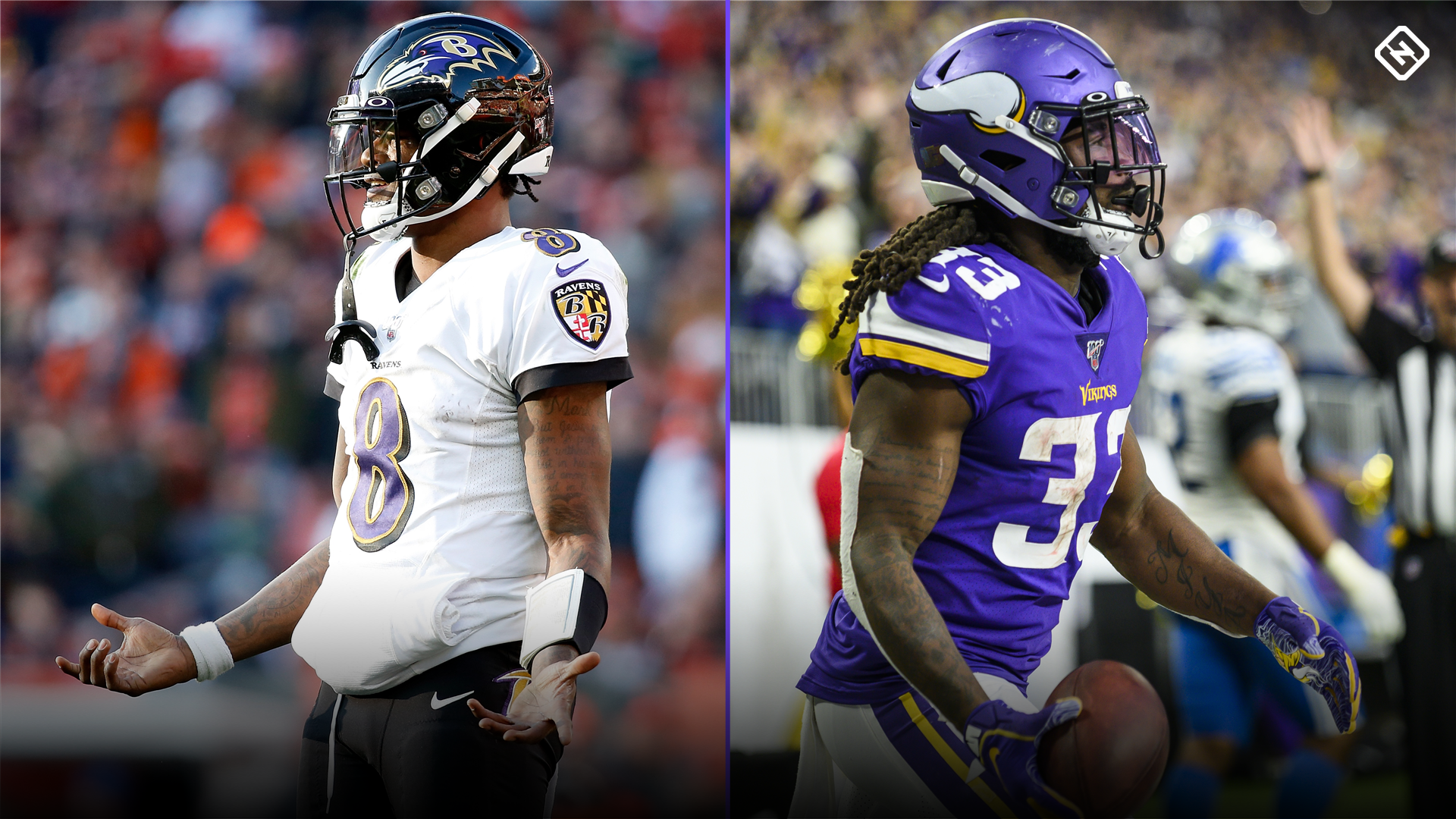 Players sitting out in Week 17 is the downside of fantasy football leagues that hold their championship week in the NFL’s final regular season week. Any team that’s already locked up playoff positioning has more incentive to hold its players out to avoid injury heading into the postseason. The NFL playoff picture still has a lot of moving parts, but fantasy owners can find some sleepers and busts to help with difficult start ’em, sit ’em decisions by looking at what we already know about the AFC and NFC postseason seeding.

The following is a team-by-team breakdown of what teams have to play for in Week 17. Below each team is a look at how various fantasy values are affected by the potential of teams resting players. As news comes out throughout the week about players sitting out, the analysis will be updated to reflect that.

With their Week 16 win over the Browns, the Ravens locked up the AFC’s No. 1 seed. That means that no matter what happens in Week 17, Baltimore will have home-field advantage throughout the AFC postseason to go along with its first-round bye.

Lamar Jackson is the biggest fantasy name to be affected by this development. The Ravens have announced Jackson will sit out Week 17. Robert Griffin III will start at quarterback for Baltimore. Against a strong Steelers defense playing for a playoff berth, RG3 is no better than a second quarterback in two-QB leagues in Week 17. Give a boost to Pittsburgh’s D/ST, too, with Jackson out.

The Ravens could also choose to sit their top options at other positions. Mark Ingram (calf) is already hurting, so Baltimore announced that he’ll miss out, too, leaving Gus Edwards and Justice Hill to get backfield work. Hill is the more intriguing PPR option, while Edwards is more interesting in standard leagues. At WR, Marquise Brown could sit out, but that wouldn’t elevate any other receivers into playable fantasy territory. And at TE, Mark Andrews would be the most likely sit-out candidate. If Andrews sits, elevate Hayden Hurst into back-end TE1 range thanks to his big-play upside.

The Patriots still need to win to secure a first-round bye. That means you should expect Brady and co. to be on the field. Edelman is battling a knee injury, so he could be held out of action as soon as the Pats feel secure against the Dolphins. If Edelman is active, he’s still a good fantasy play against Miami, but beware of a possibly low snap count. He’ll need to produce early if the Patriots blow out the Dolphins.

The Chiefs can secure a first-round bye with a win and a New England loss. That means that the Chiefs will roll out Mahomes, Tyreek Hill, and Travis Kelce as usual in hopes of taking the first round of the playoffs off. The KC backfield might be one to avoid, though, especially if LeSean McCoy is back active in Week 17.

The Texans can move up to the three seed with a win and a Kansas City loss. Moving up to three would guarantee a first-round matchup against the non-Bills wild card team. The Texans could choose to play it safe with any dinged-up players heading into the week, but unless there’s news about a particular guy, expect Houston to approach Week 17 as usual.

Bill O’Brien has said that the Texans are “playing to win” in Week 17 and not planning on resting anyone, although keep an extra eye on Will Fuller V (groin) and Kenny Stills, who were both injured in Week 16. Ian Rapoport has already reported that Fuller will miss Week 17.

The Bills are locked in as the AFC’s No. 5 seed no matter what happens in Week 17. That means that Buffalo could choose to fully rest players like Allen, Brown and Devin Singletary. They could also play them for a half, or a quarter, before pulling them. If you’re relying on them, that’s the nightmare scenario if you don’t know it’s happening and start one only to get a half of action.

If Buffalo were to sit Allen, Matt Barkley would start at QB. Frank Gore would soak up plenty of carries if Singletary sat out, making Gore a possible volume FLEX play if that ended up being the case. And if the Bills sit Brown, deep-threat Robert Foster would likely start on the outside and be an interesting DFS stab.

All these teams have everything to play for. Tennessee is in the driver’s seat and is in the playoffs with a win, while the Steelers and Raiders need help. Expect any players on the edge of playing to try and take the field in Week 17. That means Derrick Henry (hamstring), James Conner (shoulder), and Josh Jacobs (shoulder) could all push through injury. If that trio is active, it’s hard to sit them in fantasy lineups despite the dings.

Because of a final-week matchup with the Seahawks, the 49ers could either lock up the top seed in the NFC with a win or move to a wild card spot with a loss. That’s as big a swing as you can get in the final week of the season. Expect the 49ers to roll with all their studs, and no one is battling injury to worry about anyway.

The Saints still have a chance to finish with a first-round bye. That means that they will use all their usual players for their usual allotments. If anything, Michael Thomas should get a little bonus as New Orleans looks to expand his single-season reception record. Fantasy owners can also finally feel better about Alvin Kamara after he scored twice in Week 16.

Green Bay Packers: No concerns about players sitting out

The Packers will still have a shot at a first-round bye in Week 17 if they win on Monday Night Football in Week 16. If they lose, there will still be a division title to play for to get at least one home game.

Aaron Rodgers, Aaron Jones and Davante Adams will be prime fantasy plays in Week 17, especially when you consider the favorable matchup with the Lions.

The Eagles are beat up as it is, but expect all the studs to be out on the field in Week 17 after a massive Week 16 win over Dallas. Philadelphia secures the division title with a win in New York against the Giants. Carson Wentz, Miles Sanders, Zach Ertz, Dallas Goedert, and Greg Ward Jr. should all play their usual roles in the final week of the regular season.

The Seahawks still have a division title to play for in Week 17 after a bad loss to the Cardinals in Week 16. A win gives Seattle the top spot in the NFC West and knocks San Francisco off its pedestal.

The biggest storyline out of Seattle is in the backfield, where Chris Carson (hip) and C.J. Prosise (arm) are done for the season. Lynch has signed with the Seahawks and is likely an RB upgrade over Travis Homer. Lynch is a speculative FLEX play, while Homer has FLEX value in PPR formats as things stand.

Minnesota Vikings: Expect Dalvin Cook to sit out Week 17 without much on line

The Vikings are in the playoffs regardless of what happens in Week 17. A Monday Night Football win over the Packers in Week 16 would make things more interesting, but the likely scenario is that Minnesota is only playing for one of the two wild-card spots — not a huge swing in the scheme of things.

Because there likely won’t be much for the Vikings to play for, expect Cook (shoulder) to sit out Week 17 and potentially be joined on the bench by Alexander Mattison (ankle). That would mean another start for Mike Boone, this time against the Bears.

The Cowboys still could get into the playoffs with some help, so they won’t give up on the season just yet. That means the AC joint injury that Prescott is dealing with will be played through for another week. Prescott struggled in Week 16 against the Eagles, although it’s hard to say whether that was the injury’s doing. At the very least, downgrade Dak slightly, but he’s still a QB1 for a great matchup with the Redskins.

The Bengals finally placed A.J. Green on Injured Reserve heading into Week 17, something that basically everyone saw coming. Expect other teams not listed above to be cautious with players battling injury and potentially shut them down for the remainder of the season. Below, we’ll track the players who have been ruled out of Week 17 by non-playoff teams.

A.J. Green. Green ends up missing the whole season thanks to an ankle injury sustained on a poor field in Dayton in the preseason. Yuck.

Lexus Vision of the Future with their Moon Vehicles – Trendland Online Magazine Curating...