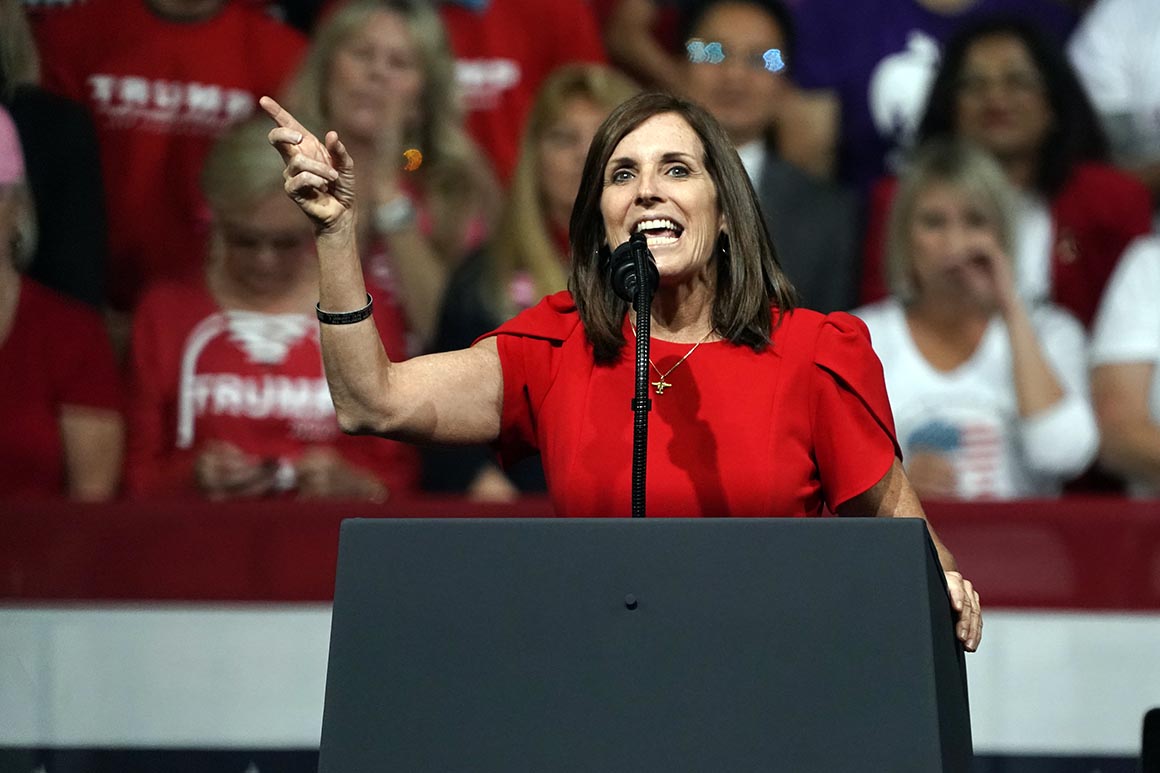 “The party’s been very supportive, Leader McConnell has been incredibly supportive, everyone, I think that we’re doing a great job,” Loeffler said in a recent interview. “In fact, under President Trump, more Republican women are running for office at any time in history.”

But they all face difficult campaigns.

Kelly has significantly outraised McSally since he launched his campaign, and nearly every poll shows McSally losing in a state where Trump is also struggling. Collins faces the toughest and most expensive race of her career, amid a barrage of attacks from the left for her vote for Supreme Court Justice Brett Kavanaugh. A recent internal GOP poll conducted in late June, however, found Collins ahead by 8 percentage points.

Ernst’s race is a toss-up and a recent poll from the Des Moines Register had Greenfield leading as Trump’s poll numbers slip in a state he carried four years ago. And Loeffler has trailed Collins in the polls amid scrutiny over her stock trades during the pandemic, though the FBI and Ethics Committee have since dropped probes on the issue.

Democrats argue that the GOP has a major problem with women voters, fueled mostly by Trump’s divisive presidency, and one that will hurt Senate candidates across the map. National surveys and battleground polls consistently show a major advantage for Joe Biden over Trump with women. Biden had a 22-percentage point lead among women in a recent New York Times national survey, and an even larger lead among college-educated women. Democrats expect similar gender gaps to emerge in Senate contests, some of which are being fought in presidential battlegrounds.

“If you vote with an unpopular president like Donald Trump — who’s doing damage to your state — 96, 97, 98 percent of the time, voters are going to hold you accountable,” said Martha McKenna, a veteran Democratic strategist who ran the Democratic Senatorial Campaign Committee’s independent expenditure program in 2018. “Trump’s ugliness and destruction, and their complicity in that, is an impossible hurdle for them. Women voters are done and that’s true for all of them.”

Your guide to the permanent campaign — weekday mornings, in your inbox.

Democrats have 17 women in their caucus — more than one-third of their party’s senators — and they’ve played key roles in the party’s electoral success in recent cycles. Sens. Kyrsten Sinema of Arizona and Jacky Rosen of Nevada were the only two Democrats to flip GOP-held seats in 2018. This year, the DSCC has endorsed women in Iowa, Maine, Kansas, Kentucky and Texas, all of which could be competitive.

McConnell, meanwhile, has publicly discussed his goal of electing more women to the conference. He made adding GOP women to the Judiciary Committee a priority after the contentious 2018 Kavanaugh confirmation hearings, in which the judge faced sexual assault allegations. Still, most Republicans argue that what matters most is the quality of candidates, not whether they’re men or women.

“I think it’s important to recruit candidates, good people to serve no matter their gender,” said Sen. Deb Fischer (R-Neb.). A campaign spokesperson for Collins emphasized that the Maine Republican has “never thought of herself as a ‘woman’ senator, she is a senator” and “has never solely focused on what some might say are ‘women’s issues,’ instead, she has focused on issues that are important to all Americans.”

Sen. Marsha Blackburn (R-Tenn.), who won her seat in 2018 and joined the Judiciary Committee along with Ernst, said she’d still like to see more recruitment of conservative women and acknowledged that Trump’s numbers “have been up and down with women.” But she said that conservative women overall have an appealing message.

“Most women are center to right,” Blackburn argued. “The economy and safety and security are the top issues with women, and I think we’re good on those.”

US 2020: Postal service warns of delays in mail-in vote count